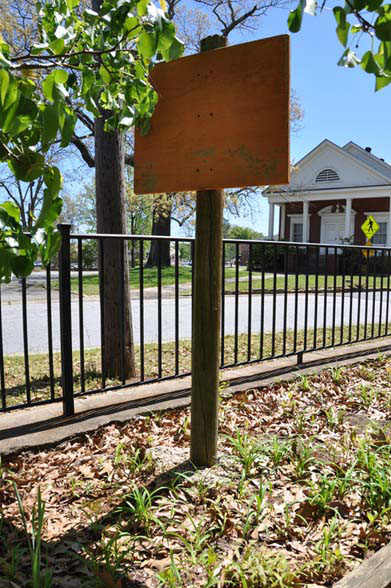 Joe Chaney was born in Smyrna, lived in Smyrna, and died in Smyrna. He was buried in the New Smyrna Cemetery and in the Smyrna Memorial Cemetery.

Yes, it’s as I say – just listen to the tale of Joe Chaney’s arm.

On a warm late summer day in 1909 (or thereabouts), Joe Chaney, a young man of about 20 and an amazing banjo picker, was driving his horse-drawn wagon through the back roads of Smyrna. It was such a fine afternoon, the shadows long and the breeze gentle; Joe decided to pull off by the creek and pick a while before headin’ on home.

Whenever Joe picked, the animals would perk up their ears and stop their gathering. It had even been said that if you looked closely you could see the squirrels and rabbits tapping their feet to the rhythm of the banjo.

I don’t know about that, but I do know that on that particular day, the music was so beautiful and wafted throughout the forest in such a fashion that it brought out more animals than usual.

Joe, caught up in the magic of the moment, didn’t notice the sly movement of a rather wily water moccasin heading toward his outstretched foot dipping rhythmically in and out of the water’s edge. Joe hadn’t noticed, but the animals had. They all held their breath and stood still as stones…all except one brave young chipmunk. The little chipmunk scurried out of his hole and darted under Joe’s outstretched leg, causing Joe to jump just as the snake slithered past in the water.

“Yikes!” Joe shouted, and threw down his banjo shattering it on the large rock nearby. He grabbed for his rifle; only he grabbed the barrel first. The rifle trigger caught on a piece of the shattered banjo, and “Bam!” It went off. The snake raced off through the water, the animals scattered, and Joe fell.

Joe nearly lost his life that day. But he didn’t. He only lost his right arm…his pickin’ arm. Now Joe, being a good Methodist, buried his arm in the Methodist cemetery – Smyrna Memorial Cemetery. Throughout the years Joe visited the site of his arm leaving flowers on the grave, picked from the forest edge.

Having read the tale of Joe Chaney’s arm, you might have an inclination to discount that it is true (some parts maybe truer than others), but there is a sign post in the Smyrna Memorial Cemetery that marks the spot were his arm is buried. The sign is worn and the letters that told the story are long gone. But the post remains and the arm is there, buried there by the man who once wore it.

This writer took poetic license to embellish this tale.

Joe was a musician and he picked a banjo.

Joe was driving a horse-drawn wagon on a back road in Smyrna when he saw a water moccasin.

Joe grabbed his rifle by the barrel to shoot the water moccasin. The trigger caught on a nail in his wagon.

Joe lost his arm that day when the gun went off.

Joe was a young man about 20 years old when the incident happened.

Joe’s right arm is buried in the Smyrna Memorial Cemetery – marked by the unmarked sign.

Joe visited his arm and placed flowers on the grave.

The rest of Joe is buried in New Smyrna Cemetery.

And that’s the facts.

And if your right hand causes you to stumble, cut it off and throw it away. It is better for you to lose one part of your body than for your whole body to go into hell.
Matthew 5:30

One thought on “The Tale of Joe Chaney’s Arm”