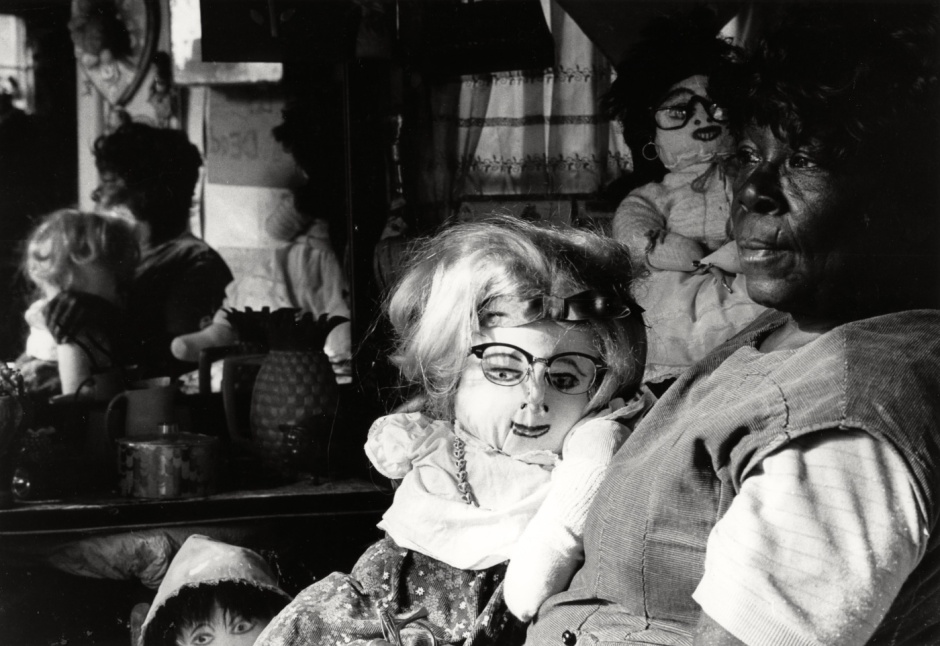 Such an interesting woman from field worker to internationally known artist. I’m working on a children’s biography about her and her work. What an inspiration!

Back in the 1970s, driving down Paces Ferry Rd into Vinings (just outside Atlanta) was a completely different experience.  There were no high-rises or urban restaurants or coffee shops. There was no upscale shopping center named Vinings Jubilee.

Back then, Vinings was a quaint village with clapboard houses lining the streets, a train station, an inn with a small restaurant, and not much else.  The affluent residents lived on one side of the tracks and the not so affluent lived on the other side. Coming down the hill you drove through this “other side” in order to go into the village.

At the bottom of the hill, by the railroad crossing and just past the tracks, stood the old train station; just this side of the track, known as the other side of the track, up higher on a bank, sat a tiny white house with the weirdest looking stuff everywhere!  Bizarre relics scattered across the lawn from the porch to the road.  These colorful trinkets hung from the branches of trees and shrubs; they were strung across the porch and fence and any other place that could be found to hang. Dolls of all sizes, including heads only, were stuffed, stacked, and prominently displayed.  Rumor had it that the woman was a witch; but if not a witch, at the very least she practiced voodoo.

Always fearful, but completely intrigued by this woman and her lawn full of stuff, I would stare as I rode past hoping to glean some sense of reason for her display.  As the years went by, the landscape changed and so did the house. The woman died. The trinkets with all their pretty colors were taken down. The house stood unadorned for many years. It seemed lonely. Finally, the house came down to make way for newer and oh so much bigger homes.

On occasion, I would think of the woman and her trinkets and wonder after her. I decided to see if I could find out anything about her. As it turns out, in the art world, she has gained national and international recognition as a great American Folk Artist.

Her name was Nellie Mae Rowe. She was the ninth child out of ten, born on July 4, 1900 in Fayette County, Ga. Her father was a former slave; her mother was born the year of emancipation.

As a child, Mrs. Rowe worked the fields on the farmland her parents rented. In an interview (Armstrong, 1976), she put it this way, “I wanted to be an artist but I had to go to field. I didn’t have a chance to be what I wanted. I otta been in the field. I’d go hide and make dolls outta dirty clothes.”

Mrs. Rowe married twice and was widowed twice. She came to live in Vinings with her first husband, Ben Wheat. After his death, she met her second husband, Henry (“Buddy”) Rowe and together they built the clapboard house which she eventually came to call her ‘playhouse.’

About her artistic gift she said,” God gave me my own talent. He didn’t put everyone here to do the same thing. He did not. He put me here to do one thing. The talent he gave I have to use it.”(Armstrong, 1976)

Bless her, she certainly used it. She was a pioneer recycler with her chewing gum sculptures (only using gum she had chewed), her quilt-piece stocking legged dolls, and her crayon-colored drawings on cardboard, egg crates, and Styrofoam food trays. She used ordinary, everyday, at-hand materials; and she did it brilliantly.

Regarding the subject of her art, Mrs. Rowe had this to say, “I draw things you ain’t never seen born into the world and they ain’t been born yet. They will be seen someday, but I will be gone.” (Morris Museum of Art).

And seen they are. Mrs. Rowe’s first show in 1976 was Missing Pieces: Georgia Folk Art 1770–1976 at the Atlanta History Center. Her first one-person exhibition followed at the Alexander Gallery in Atlanta in 1978.

Her art continues to be collected and is shown in many traveling exhibitions. In permanent collections her works can be found in the Morris Museum of Art, the Smithsonian American Art Museum, the Library of Congress American Folklife Center, and the American Folk Art Museum in NYC. Nellie Mae Rowe has her own exhibition room at the Atlanta High Museum with over 100 of her art pieces on display.

I often wish I would have stopped to meet Mrs. Rowe instead of fearing what I thought; not because she became famous, although I’m glad she did, but because her spirit seemed pure and right, and full of God’s love. That you just don’t find very often.

Back in the 1970s, driving down Paces Ferry Rd into Vinings was a completely different experience.  There were no high-rises or urban restaurants or coffee shops. There was no upscale shopping center named Vinings Jubilee.

Back then, Vinings was a quaint village with clapboard houses lining the streets, a train station, an inn with a small restaurant, and not much else.  END_OF_DOCUMENT_TOKEN_TO_BE_REPLACED